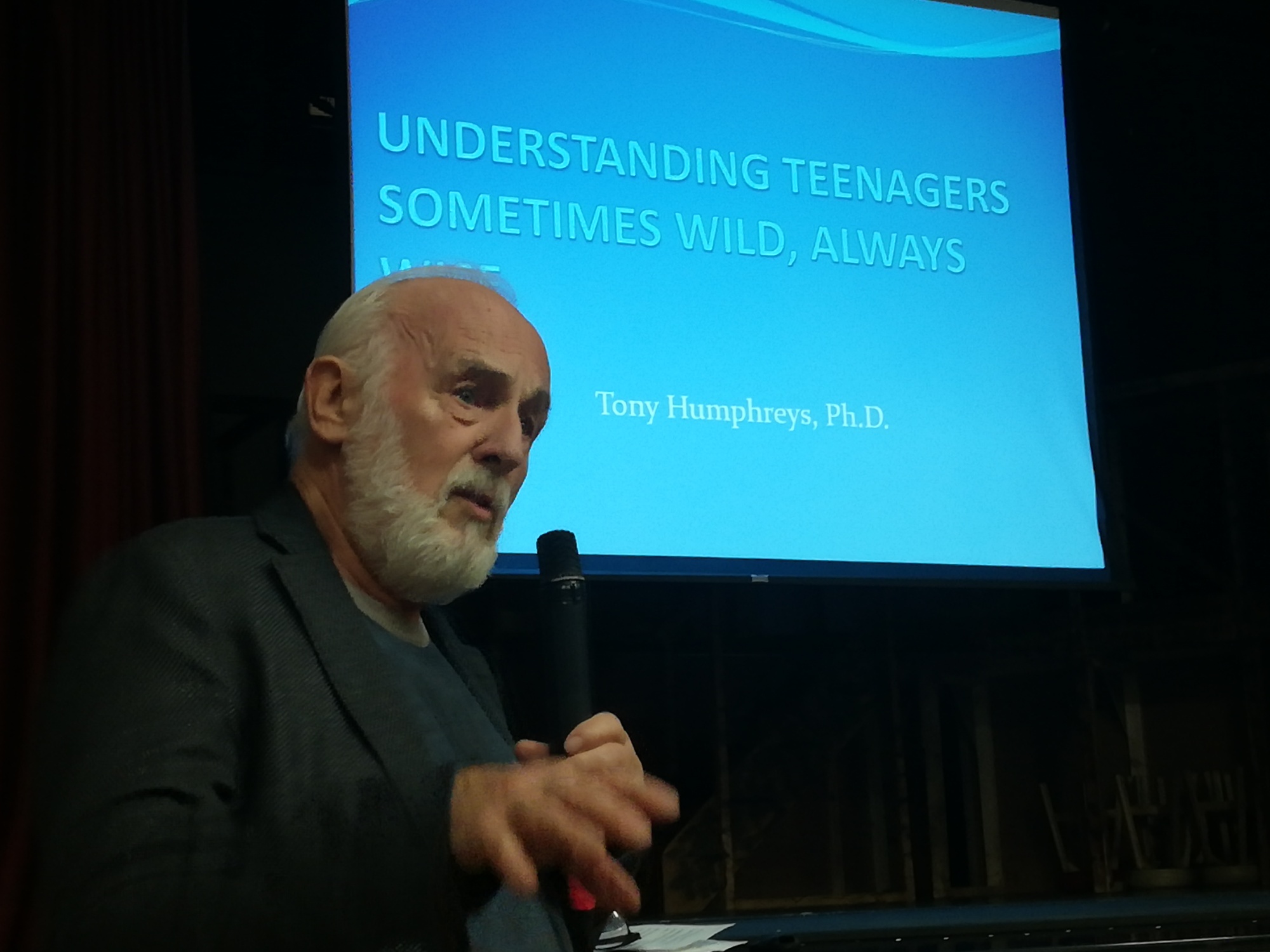 On 18 November the PTA were delighted to host a talk for parents by Dr Tony Humphreys, Clinical Psychologist. Tony spoke on many aspects governing the relationship between a parent and a child. His primary theme was that before a parent can really be present for their child they needed to be present for themselves. He highlighted examples of the lack of support parents and teachers might receive and gave many examples of how the experiences of parents' early lives might affect the way they view themselves and their relationships with their teenagers.

Tony highlighted the need to champion our teenagers, commenting that passivity spoke more loudly than aggression and of course we need to communicate with our teenagers. He pointed out that not knowing that we are loved is the cause of most cases of human misery. Our teenagers need to know that they are loved unconditionally.

In discussing teenagers'  behaviours Tony highlighted that when a teenager is struggling there is a story. Our role as parents is to find that out with an air of curiosity. All teenage behaviour is a form of communication and a form of creativity in and of itself. The problems we often identify in our teenagers are not the "problems", instead they are the teenager's solutions to the uncertainty and the void they find deep within themselves. Dealing with teenager behaviour can also be challenging as it requires us to look at our hidden side. Its useful to ask the question HOW? How is that for you? What is happening for you? Also a good question is to ask what the child is getting from their behaviour, because if they were not getting something from it they wouldn't be doing it.

He asked how many of us give advice rather than finding out how are children are? He pointed out that to a teenager our impatience is more challenging than a messy room. Simple things such as tone of voice is also important, we often speak in a tone of voice that is not neutral or inviting further comment or conversation from our children. Tony suggested that tone of voice is responsible for so much human misery  Enrolling help and making requests; are useful tools as are establishing boundaries for our own behaviour and limits.

Teenagers, he told us are not what they do, not the sum total of their achievements, They are themselves. That is the challenge to parents of teenagers in a high achieving school. He asked us how well we knew our teenager, and if we didn't know them well then it might be an idea to get to know them. In so doing we can encourage our teenagers to name their problems and also their solutions. Whilst we may be accustomed to thinking that parenting teenagers is about stopping some behaviour, that's actually not true, its not about stopping certain behaviours but about creating something new and enabling our teenagers to do that for themselves. We are responsible to our teenagers but not for them.

It was really a very entertaining engaging and enjoyable talk, and very thought provoking.

Click on the link below for Tony Humphreys' presentation.